This Monday we decided to pull back the curtain and show the numbers behind the scenes of the glitzy and glamorous entertainment industry. Read here to learn about the most recent market movements from the four companies in the industry that have been keeping shareholders entertained while attracting the attention of bullish investors.

Netflix (NFLX) Stock Rockets Higher on Rumours (Released 01/07/2016)
It seems that Netflix (NASDAQ:NFLX), our favorite binge watch streaming network, is doing well in the markets. Last week, the stock price rocketed based on an announcement from CCO Ted Sarandos stating that the company intends to expand to China. Entering the Chinese market would be a huge market opportunity for the web-streaming giant. That partially explains why there was a huge surge in trading volume last Friday, with a 5.5% gain in price throughout the day ending at $96.97. But expansion plans alone can’t be the only reason for such an impressive overnight increase. John Divine’s article delves deeper stating that there are rumours floating around Wall Street that Walt Disney Co. (NYSE: DIS) may be interested in buying out Netflix. It’ll be interesting to see what the future has to hold for this stock but to keep updated set your Call Levels. 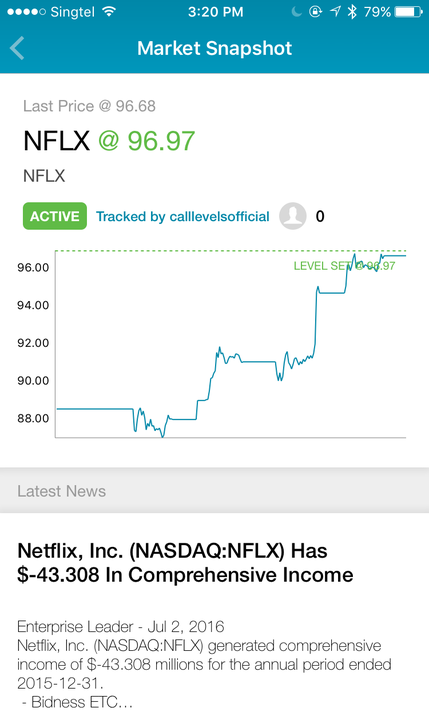 Short Term Price Target on Time Warner (TWX) (Released 01/07/2016) What do The Dark Knight, Harry Potter, and The Matrix have in common? They’re all under the banner of Time Warner (NYSE: TWX). Last week Time Warner’s stock appreciated by 0.67% and is up 1.31% in the last three month period. The current market price is up 1.05% from the previous day at 74.31. Currently analysts at Goldman Sachs have placed a “Buy” rating on the stock, increasing the target price from $81 to $87. While Goldman rates the stock as a “Buy” many others consider that the stock’s fundamentals point to a bright future but give the stock a “Hold” rating. To be safe go in and set your price alerts on the Call Levels app before jumping in!

Lionsgate Entertainment (LGF) Stock: Reaching For The Starz! (Released 30/06/2016) Lionsgate Entertainment (NYSE: LGF) has had a rough time this past year, with its box office films like the Hunger Games underperforming at the box office. Poor film and TV reception has left its share price close to the year’s low. However, bullish media investors cheered as shares of Lionsgate Entertainment rallied more than 10% on news that the company will acquire Starz, according to CNBC. Under the terms of the deal, Lionsgate will buy the premium cable channel for $4.4 billion in cash and stock. Following the pending acquisition each share of Lionsgate common stock will be split into 50% voting and 50% newly created non-voting shares. Investors are looking at the new acquisition with renewed optimism, and are eagerly awaiting what the partnership with Starz will yield.

Dreamworks Animation SKG (DWA) Highlighted As Strong And Under The Radar Stock Of The Day (Released 01/07/2016) Dreamworks, the popular digital animation studio responsible for the likes of Shrek, How to Train your Dragon and Kung Fu Panda has been steadily climbing the charts. Trade-Ideas LLC identified Dreamworks Animation SKG (DWA) as a strong and under the radar candidate. DWA is in the upper 20% of its one year range and making at least a new 3-day high. Dreamworks’ current market price is up 1.02% from the previous month and has been making steady gains since Comcast’s $3.8 billion dollar buyout late in April. Community sentiment towards Dreamworks is bullish and gradual increments in its stock price are expected.