Seven days ago, on January 20, 2017, the world took witness to what could possibly be U.S biggest upset in political history – Trump’s Inauguration. “Make America Great Again” was set as the inaugural theme, but Trump’s leadership is seen to be a felony as demonstrations broke out against his presidency on the very same day. While global markets did not react as wildly as the violence that broke out within the nation, investors around the world have shown a mixed reaction to the start of Donald Trump’s presidency as they sit back to see if the newly appointed president will deliver on his economic promises.

The Dow Jones Industrial Average closed at 19,827.25, rising by 94.85 points while the Nasdaq composite index sat at 5,555.33, 15.25 points higher than before. The S&P 500 equity index inched 0.3 percent higher at 2,271 in which Skyworks Solutions led the biggest gain, jumping 13 percent to $88.67 from $10.21. Procter & Gamble also saw its stock price rising to $87.45, a 3.2 percent increase after the consumer goods maker released a strong growth forecast. Telco stocks also received a boost as strong subscriber numbers contributed to AT&T’s increase in share price of 1.1 percent to $41.45. On the flip side, some companies reported revenues that fell short of analysts’ forecasts such as General Electric, decreasing 2.2 percent to $30.53. The largest loser in the S&P 500 index was Bristol-Myers Squibb that dropped a whopping 11.3 percent to $49.23 after it announced that it would not go ahead with the accelerated regulatory approval for a two-drug lung cancer treatment. This came as a surprise as stocks do not typically perform well on inauguration day. Bespoke Investment Group states that “Going back to 1928, the S&P has averaged a drop of 1.05 percent on inauguration days.” However, the rally in the stock market could have been largely attributed to corporate earnings beating Wall Street’s expectations on Friday, causing investors to bid up the shares in those companies.

The dollar index DXY took a slight dive of 0.3 per cent against a basket of six major currencies following Trump’s inauguration speech. This was mainly due to pessimism and negativity in Trump’s remarks leading to a sense of heightened policy uncertainty contributing to a volatile US dollar. In essence, Trump’s focus on protectionism translating to potential trade wars was not seen as something that is good for the greenback. Euro rose 0.2 per cent to $1.0688 and the dollar also dropped 0.2 per cent versus the yen to 114.57.

Despite the dip in dollar, consensus are pointing towards people piling back into the long dollar trade due to strong fundamentals such as “higher consumer confidence, Trump’s fiscal reform and a China that is now sounding more conciliatory.” – David Woo, head of global rates and currencies research for Bank of America Merrill Lynch.

However, Woo personally thinks that “Trump’s presidency is actually a “contradiction” for the U.S. dollar. Fiscal policy, which should bring growth back to the country, should be bullish for the dollar. However, Trump’s trade policy requires a weak dollar. Therefore, the currency will be much more volatile going forward than we’ve seen in many years.” 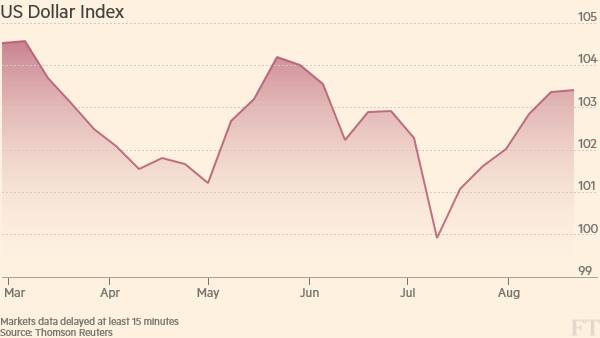 The peso on the other hand increased 1.8 percent against the dollar, recording its largest one-day percentage gain since Trump’s victory win amid relief that Trump had not made any concrete threats to Mexico in his speech.

The big question for currencies lies in whether Trump will deliberately try to weaken the Dollar in a stance to put pressure on countries who have artificially weakened their currencies causing big trade surpluses, specifically China. This is also where markets are more jittery about – Trump’s future relationship with China and the Asian region in general.

China’s yuan was largely unaffected following the release of the nation’s economic growth data at 6.7 percent which was expected by analysts. The onshore renminbi is 0.1 per cent lower at Rmb6.8729 per dollar while the less tightly managed offshore rate remains flat at Rmb6.8464.

Brent Crude Oil that is used to price international oils enjoyed a two-day gain of more than 3 per cent with prices increasing 2.5 per cent to $55.49 a barrel. Benchmark US crude inched 2 percent, closing at $52.42 a barrel. Gold rose $2 to hit $1,207 an ounce.

Given the volatility expected in the Dollar and uncertainty hovering in the markets, investors will be flocking to safe haven assets such as Gold. Gold prices in New York trading have increased 11.9% since Trump’s presidency win. “Right now uncertainty is at a peak. And, actually, uncertainty is the enemy of long-term investment. So I don’t think the markets are going to do very well,” Soros told Bloomberg at the World Economic Forum in Davos, Switzerland.

Creating jobs for Americans, decreasing corporate taxes and building more infrastructure formed the basis of Trump’s campaign promises that investors would want to see delivered. The failure of delivery would cause a great deal of disappointment in the global equities markets which have gained ground since the November US election that crowned Trump victorious. Not to mention the markers would keep an eye on the other negative market policies that Trump would embark on such as his strong stance towards protectionism, and convictions on triggering a trade war with China.

Perhaps, it is highly advisable to keep a close eye on US economic data such as homes sales, jobless claims, fourth-quarter gross domestic products and durable goods orders, to determine the strength of the US economy before the next Fed policy meeting on 31st of January. As these economic numbers still remain as a key driver and source of uncertainty for markets, do remember to set your Call Levels ahead of important releases.

If you want to improve returns on your equities investments by leveraging the power of market monitoring and real-time alerts, download Call Levels: